Imprisoned social justice activist Kenneth Bell is being targeted by the administration at Potosi Prison in Missouri. From a letter dated 10-24-15… “Until a couple of days ago I was the prison law clerk, “Jailhouse Lawyer”, but I was fired for filing grievances and for assisting others who are incapable of doing it themselves. . . . Please form a network of people who will call and confront officials about my firing. If I am to continue to help them here in PCC I need to be back in my position. . . . By firing me, prison officials hope to intimidate other prisoners and thereby discourage anyone who would be inclined to complain about conditions here, or who would try to help another prisoner do so.”

Many of you may remember the horrendous conditions that we described at Potosi last winter and the torture endured by prisoners who went on hunger strike after being retaliated against for complaining then.

I have attached a copy of his reprisal grievance as well as an article he mailed to me regarding solitary confinement in the United States. Please call now and start leaving messages for the administrators to ask that Kenneth Bell be restored to his position in the law library.

Click here for a “How-To” video for calling prisons

Here is a sample script…

Hello, I am calling to request that Kenneth Bell #179161 at Potosi Correctional Center in Missouri be reinstated to his position in the law center. Can you please look into the reason for his dismissal? It appears that he was fired from his position in retaliation for making complaints about the prison system.

Please call any or all of the following: 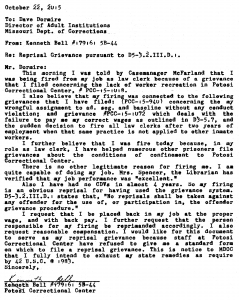 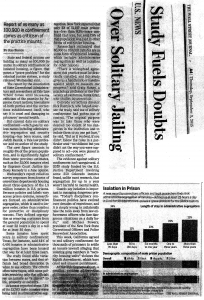