Waupun, WI- Prisoners at Waupun Correctional Institute (WCI)  have vowed to protest conditions by refusing to eat, starting on June 10th. They insist that solitary confinement is torture and demand that Wisconsin cease the practice. “This aim is not to facilitate death, but to facilitate human dignity and humanitarian accountability,” said Cesar Deleon, one of the protesting prisoners.

According to Deleon, prisoners in solitary at WCI are never allowed to go outside or see the sun. The one hour per day of recreation they’re allowed out of their bathroom-sized cells is spent in an indoor recreation cage, which is often filthy with urine and feces because once a prisoner is moved to the cage, requests to be allowed access to a bathroom are ignored by staff. Prisoners in administrative confinement (AC) are not only extraordinarily isolated from general population, but also from loved ones and spiritual leaders. AC prisoners are allowed one 15 minute phone call and one 15 minute video visit per week, the calls and conferences are closely monitored and can be cut off with very little pretext. Spiritual leaders who regularly visit other prisoners are not allowed to visit the AC unit, which is a clear violation of the constitutional right to religious practice.

The Wisconsin Department of Correction (WDOC) holds over 100 people in administrative confinement, some have been in one form of isolation or another for decades. Last August, WDOC announced a 90 day limit on their use of segregation as punishment for all but the most severe cases. Those changes did not apply to AC prisoners though, because according to WDOC, Administrative Confinement is “non-punitive.”

The prisoners are calling for an end to the practice, entirely. Their six demands include a legislative cap on the use of AC, compliance with the UN Mandela Rules on solitary confinement, increased oversight, one year limits, mental health treatment and a federal investigation of harassment by staff, which the prisoners describe as a mind control program, designed to “break and recondition” anyone staff perceives as a threat.

There will be support rallies on June 10th in Madison and June 11th in Milwaukee as well as a letter writing and phone pressure campaign to support the demands of the prisoners. Detailed information, including writing and personal perspectives from the prisoners and their families is available online at SolitaryTorture.blogspot.com.

Wisconsin’s use of long term solitary confinement is called Administrative Confinement or A.C. Some Prisoners have spent decades is isolation in our prisons. We have of heard of some reforms of a program called “segregation” where prisoners supposed to be punished for rule violations but AC is supposed to be non-punitive, but instead it is punishment in the extreme. Activists who have worked with AC in other states tell us Wisconsin AC has more restrictive rules than any they have seen.

Starting June 10 some of Waupun Correctional AC prisoners are starting a “food Refusal” campaign to bring this horrific program to the attention of the public, and to call for an end to Administrative Confinement in Wisconsin. There have been actions like this in other states that have resulted in greatly improved conditions.

There will be a rally/ Press conference in Madison in support on June 10th at 1 pm outside on the west wing of the Madison Capital building. For more information, contact: 262-443-7831, and sophiaorganizer1@gmail.com

Another event will take place in Milwaukee on June 11th, at 12 PM (noon) at the Milwaukee County Courthouse. For more information contact: 414-350-9585, argentum111@me.com

There will be families of AC prisoners speaking as well as activists, and legislators.

Readers can go to www.solitarytorture.blogspot.com to find out more, sign a petition and learn about other actions. We will keep you posted here on the progress of the ‘food refusal”.

Administrative Confinement(AC) is a special program that allows the confinement of prisoners indefinitely. It has very vague criteria and now confines mostly mentally ill, Black and Hispanic people whom the DOC deems as trouble makers. AC became widespread when the Supermax was built in 2000. Before that there were only about a dozen people constantly in isolation and the rules required immediate provable danger. Those rules were changed to ‘History of violence” and “thought to be dangerous” in order to fill the new Boscobel prison.

Now we have 102 prisoners on AC spread out into four maximum security prison. Some have been in some form of isolation for over 20 years. All shift from segregation to AC periodically but the conditions are the mostly the same. AC is supposed to be non-punitive, but the rules and deprivations are punitive to the extreme. For example, prisoners are not allowed art supplies and must write with a pen nib.

Here are some conditions at WCI:

1) Most AC prisoners spend 24 hours of everyday in a bathroom sized cubical. There are many complaints about the incessant yelling and banging .

2) Although studies show that frequent contact with family and friends is the best way to reduce recidivism, Waupun allows only one phone call a week. Visits are by video and sometimes are cut off after 15 minutes and are also allowed only once a week. Spiritual leaders who regularly visit other prisoners, are not allowed to visit AC prisoners

2) WCI AC prisoners NEVER go outside, never see the sun. They can go to rec a few days a week but it is an indoor cage. Few inmates go to rec because the cage is filled with urine and feces-there are no bathrooms and no emergency call buttons in the rec cage. Showers are another not -so -nice way to leave the cell for AC prisoners as the water is not warmed up and is usually freezing.

3) Both Staff working in AC and all solitary units and prisoners are usually demoralized, making for an awful stew. One big reason is there are no programs, and a severe shortage of staff (professional and guards), and nothing to do. Self-harm becomes an important stress reliever for a lot of mentally ill prisoners, and for guards at WCI; sadism often comes to the fore. In 2014 the Center for Investigative Journalism’s Bill Lueders came out with a series of article on complaints of guard assaults at WCI. Here is link to one of the articles http://wisconsinwatch.org/2014/07/waupun-prison-guards-accused-of-abusing-dozens-of-inmates/

Note: the same guards are still there doing the same things.

It important to note that even if WCI had the perfect set up for AC and none of the 3 points above were true, it would still be torture. 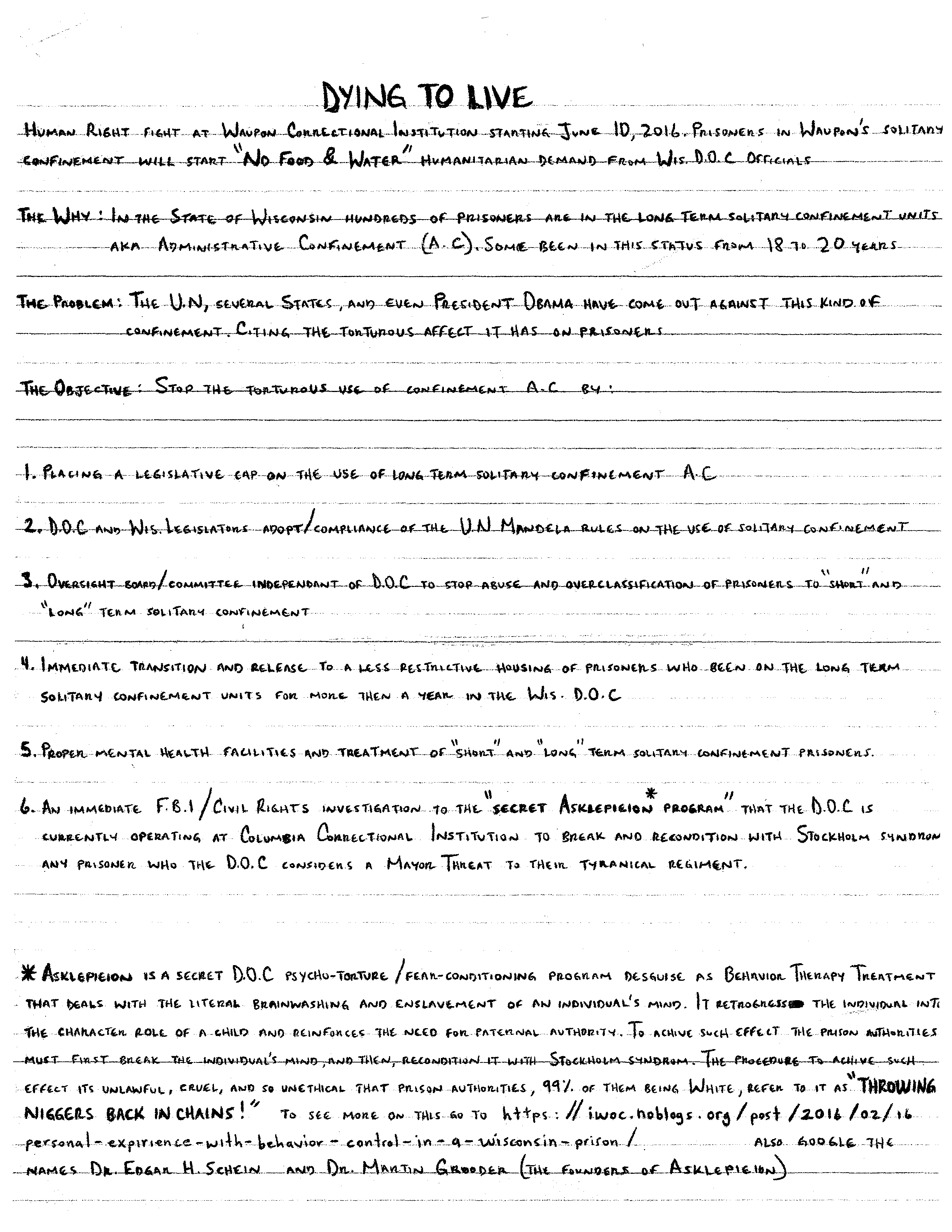